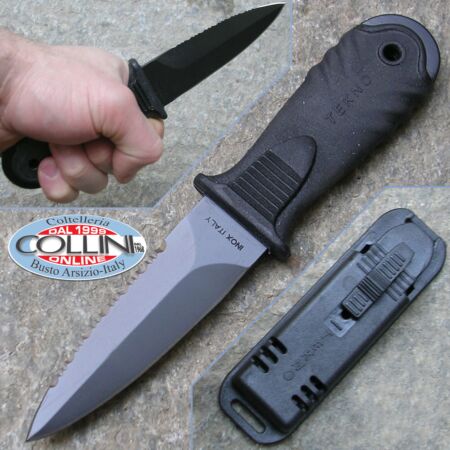 The blacksmith activity had taken shape in Maniago since ancient times and had begun to grow and develop into what is now a huge industry mainly specialized in knives and cutting tools .

It was in this environment that originated in the 20s of the last century our company , when the then fourteen-year Di Bon Giovanni began working in the field of cutlery.

In 1936, Giovanni together with other partners created a small company who worked third parties for other cutlery .

In 1958 he went into partnership his son Roberto .

In 1964 was founded the current Mac Knives that shaped the production on classic boxcutters from souvenir and promotional purposes.

Subsequently, the Mac took his first steps in other types of knife thanks to the sport of Roberto. Born around 1978 , so the first hunting knives and divers. E ' at this point that the company began a process of diversification widening further the production of cutlery underwater and starting to produce knives nautical, fishing and rescue.

With the growth of the company production became necessary a larger facility and , in 1984, the Mac shifted its doors in the industrial area of Maniago where it is now.

In 2003 he joined the company also Matthew , son of Robert , who brought increased computerization of the company.

Thanks to a wide range of machines and equipment specific date, the Mac cutlery develops throughout the production process in the company : make ourselves our molds for plastic molding and cutting of metal parts .

This provides Mac customers with a quality product, 100% Made in Italy.