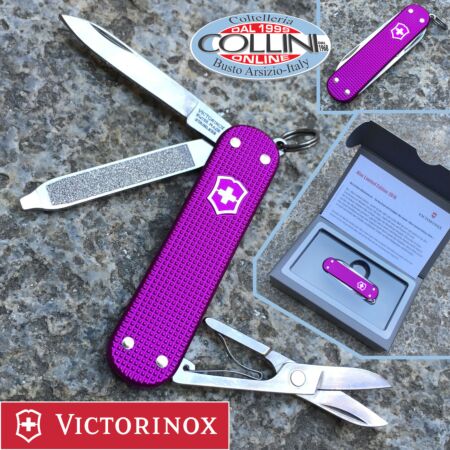 Be the first to review this product
$36.13
Fuori Produzione / Discontinued
SKU
12582
Save for later Compare

History In 1891, Karl Elsener, the founder of Victorinox, began to supply the Swiss army knives manufactured in Switzerland and not in Germany as they did before. The original had a wooden handle (with respect to the compounds of metal / plastic used today), and was equipped with a blade, a screwdriver, a bottle opener and an awl. Later, in 1897, Elsener developed a version that used a special spring mechanism that allowed more tools to be contained in a handle of the same size. The range of models is vast, ranging from models based on two blades up to boxcutters Swiss have fifty tools.

The type of tools that can be found in a Swiss boxcutter is limited only by the size of the object and the imagination of designers. For example you can find various kinds of screwdrivers, allen, blades, altimeters, magnifying glasses, cutlery, nail files. In recent models have even appeared instruments as laser pointers for overhead projectors and USB flash drives.

In recent years, in addition to production of the classic boxcutter, Victorinox produces and sells the so-called SwissTool: a multifunction (pliers folding blades and accessories concealed in the handle) similar to the American Leatherman Tool. Wenger is also specialized in the production of watches, and is operating under the "Swiss Army". It seems that the traditional red color of the handle has been chosen because it is easy to see if the knife falls in the snow (in addition to call, together with the white cross, the Swiss flag).