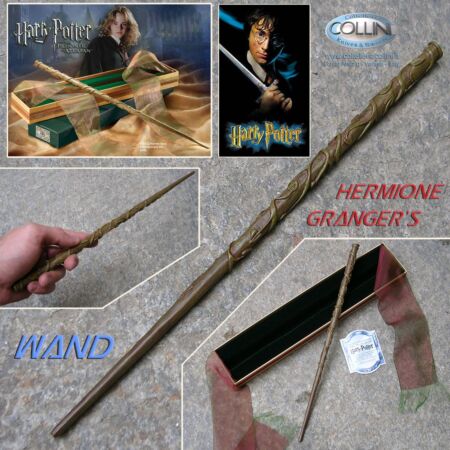 Skip to the beginning of the images gallery
Back to:
Next 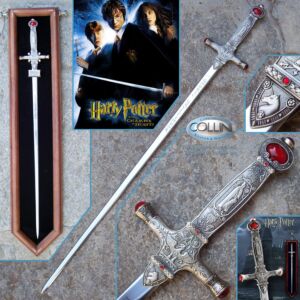 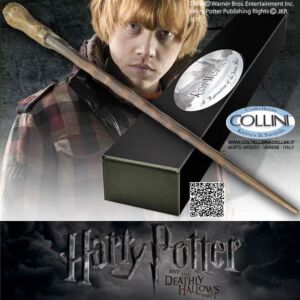 It ' made from resin and has a length of 38 cm.Viene supplied with original box used in the film " Harry Potter and the Philosopher's Stone"

Hermione Jane Granger (born 19 September 1979 ) is a character in the book series by JK Rowling's "Harry Potter" . His character is played by Emma Watson in the movies . Hermione is a student of the Gryffindor house at the School of Witchcraft and Wizardry Hogwarts and the best friend of Harry Potter, Ron and Ginny Weasley . Plays an important role in many of the adventures of Harry , and serves as a moderating influence on both Harry and Ron . Hermione has brown eyes and , in the first Apparition , " bushy brown hair and rather large front teeth ." Many at school teased her for her looks , including , on one occasion , Professor Piton.Nel 4 book after a spell caused to her to make her teeth grow out of proportion , he decided to put it back accorciandoli a bit , so giving it a bellissoimo smile. Hermione is very studious , and can be authoritarian and boring , is one of the smartest students in his year and one of the best in the entire school. It is often teased for that too. Harry and Ron depend on her for the school environment since it is often corrects the tasks of the two , and his knowledge and common sense are always important results in overcoming the challenges facing the Trio. Hermione is brave and loyal, with a fair political consciousness , and usually knows how to cope in crisis situations. Despite being the most sensitive , sometimes becomes awkward or insensitive in dealing with people - for example, his misguided attempt to tell Lavender Brown that the death of his rabbit was not actually ever been predicted by Trelawney . Steve Kloves , screenwriter of the film, said of her that " Hermione shows sometimes not being able to understand at all how it affects people." According to Rowling , Hermione is deeply insecure and tries to disguise trying to be the best in everything , projecting a false self-confidence in doing so irritating . J.K. Rowling admitted that Hermione is similar to her young. Hermione 's Patronus is an otter , a symbol of curiosity and empowerment of women , which is also the favorite animal of Rowling . Hermione 's middle name , Jane (never mentioned in the book but only at the site of the writer ) , is the feminine of John , as well as Joanne , the name of Rowling. Hermione is a Muggle , in fact his two parents are dentists. Rowling has stated that Hermione had initially wanted a younger sister but he thought it was too late to change the book and it was better if she had been an only child. As soon as Hermione appears in the series knows a lot about Hogwarts thanks to a very careful documentation in this regard and the magic world and has proven suffered a girl with strong magical powers as it is able to obtain excellent results in no time. On its website, Rowling has stated that Hermione has a wooden stick down with the soul of a dragon heart string . In the original version of the saga, Hermione's name is pronounced " her- MY- oh- nee" (IPA : / hə ( ɹ ) . Maɪ.ə.ni ː / ) , unveiled in the fourth book when he teaches to Viktor Krum how to pronounce name correctly ( without much success ) ; Rowling has stated that for the name of the best friend of Harry wanted to find an unusual name .