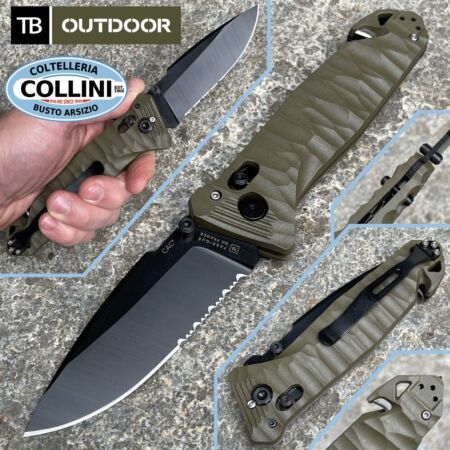 This knife is a true concentrate of all the advanced technologies that one would expect from an operational knife. The blade is in Nitrox®, with a PA6 handle

The version of the C.A.C currently supplied to the army, with the official logo on the blade and coyote handle is not available for sale to the civilian.

The CAC ® is the third knife produced by Tarrerias - Bonjean designed for the French army. Its uncompromising design, lightness and strength make the CAC® an exceptional knife. Much more technical and ambitious than its predecessors, the CAC® is TB's response to the request expressed by the French army, namely to design a sturdy and ambidextrous knife with one-handed opening and closing. To create this exceptional knife, Tarrerias - Bonjean collaborated with Philippe Perotti, a former member of the French special forces and author of dozens of books on shooting. Its proven track record in hand-to-hand combat has maximized the efficiency of knife use to make the CAC® the ideal companion for French troops in all operational theaters. The locking mechanism of the CAC® is extremely robust and guarantees perfect locking of the blade in the open position.

TB has also integrated the safe blade locking mechanism by moving the axis on the CAC®. This mechanism is extremely robust and guarantees perfect locking of the blade in the open position.

The CAC® was officially selected in 2017 by the French army, compared to the competitors' offer, for its performance and value for money. Its distribution in the various corps began at the beginning of 2018 and will largely equip our French at least until 2022.

Perfectly resistant to corrosion, the blade is made of Nitrox®. The CAC® also has a glass breaker, a belt cutter and a reversible belt clip.

The handle is composed of two polymer plates loaded with glass fibers. These plates are screwed to the mechanism by means of stainless steel screws, one of which cleverly houses a strap cutter blade. This interchangeable, curved blade is designed to cut through straps, ropes and seat belts for easy extraction in the event of an accident.